David Oxland was part of an M70 4 x 800m relay squad, running as a GB Masters team, which smashed the world record held by the USA at 10:51.08 seconds, bringing this down to 10:35.59 seconds. The team consisting of four friends from across the Midlands and North West managed to obtain an invitation to run at a track and field festival event held at the university. The other four teams included two universities, a British Milers Club team and an under 20 team from Quatar! By the time David started his anchor leg, these had just finished and with the help of British Masters own announcer, who happened to be officiating there, the students and other spectators gave fantastic support. When David started his leg, the team was about 5 seconds up on world record pace. As the result of his 2 minutes 32.4 seconds split, almost exactly the same as his outdoor British record run last year, the record was broken by over 15 seconds.

Afterwards the team was interviewed live on a YouTube streaming. 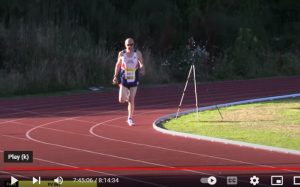